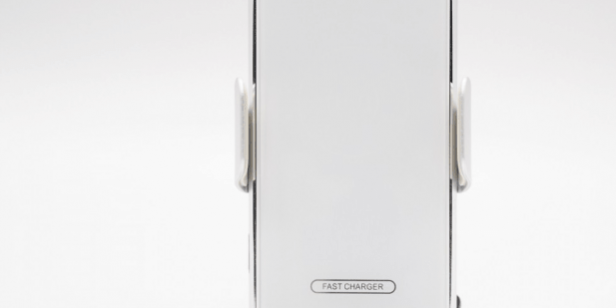 The Jinzhizhuo 15W car wireless charger adopts a paper packaging box, with the product’s appearance picture, product brand, and model printed on the front, and conforms to the Qi standard of the WPC Wireless Charging Alliance.

The back of the box is the parameter information of the product, and the number of internal accessories and the selling point of the product is marked.

In addition to the car wireless charger body, the packaging box also comes with a fixing and clamping device for the air outlet and a power supply cable.

The main part of the Jinzhizhuo 15W car wireless charger is made of metal. The surface is frosted and anodized, and the hand feels delicate. The front uses a smooth white glass panel with the word FAST CHARGER printed on the bottom. Compared with traditional car wireless chargers, the materials and workmanship of this product are more textured.

There are two raised designs on the back of the wireless charger.

There is a touch-sensitive button on the left side of this charger, which is used to control the relaxation of the clamp arm so that the user can easily take out the mobile phone.

The elastic silicone gasket is attached to the inner side of the clamp arm, which can prevent damage to the mobile phone on the one hand, and make the clamping tighter, on the other hand, preventing the mobile phone from falling during driving.

This wireless charger uses the mainstream USB-C power supply interface, and the bottom support is hollowed out in the middle, which is convenient for charging mobile phones that do not support wireless charging by connecting the charging cable. It is worth mentioning that the touch function is added to the bottom support part to facilitate the user to control the opening and closing of the clamp arms on both sides.

After the power is turned on, the wireless charger can wirelessly charge the mobile phone; and when the mobile phone is sensed, the clamping arms on both sides will automatically shrink and clamp.

When working normally, the touch button on the side of the wireless charger lights up in red.

When you need to take off the phone, just tap the touch-sensitive button on the left to open the clamp arm.

First, disassemble the front cover of the car wireless charger. There are a number of fixing screws hidden underneath, and the ambient light backlight board is in the center.

Below the backlight board of the ambient light is a wireless charging coil, and a thermistor is set in the middle.

Remove the screws at the four corners to view the internal structure of the wireless charger. The bottom of the charger is the main control PCB board, and the center of the top is the wireless charging transmitter coil and the ambient light backlight board.

Remove all the internal mechanisms, the entire wireless charger is mainly composed of four parts: the main control PCB board, the wireless charging transmitter coil, the LED backlight board, and the driving motor.

There are two connectors on the back of the PCB, which are used to connect the LED backlight and the drive motor, and there is also a touch sensor chip.

The supercapacitor specification is 3.8V 13F. Nantong Jianghai capacitors are customized products, which are more practical than the common 2.5V withstand voltage varieties.

Close-up of CBB resonant capacitor, 0.39μF 100V withstand voltage.
The touch sensor IC does not have any silk screen information.
The sensing contacts on the front of the PCB are used to control the contraction of the clamping arm.
The induction conductive cloth on the edge of the PCB is used to sense and control the expansion of the clamping arm, and the upper and lower conductive cloth are indicator lights.
Wireless charging coil and thermistor.
LED backlight board module.
The clamp arm of the wireless charger is driven by a 24BYJ48 gear reduction stepper motor from Shenzhen Hongzhifa Electromechanical Co., Ltd.
Jinzhizhuo 15W car wireless charger is completely dismantled.

Jinzhizhuo 15W car wireless charger supports four output modes of 15W, 10W, 7.5W, and 5W. It also complies with the WPC Wireless Charging Alliance Qi standard. It is suitable for wireless charging of mobile phones of many mainstream brands such as iPhone, Huawei, Xiaomi, and Samsung. It adopts the touch-sensitive clamping arm control method, which effectively avoids accidental touch and is convenient to use.

The charging head net learned through disassembly that this car wireless charger uses Bayland’s highly integrated wireless charging transmission program D8110+D9015, and the circuit design is very simple. The wireless charging and clamping part is driven by a decelerating stepper motor and can be controlled by touch induction to realize humanized operation. The built-in supercapacitor is used as a backup power source for the motor, which solves the pain point of not being able to open the clamp arm after parking.

The handle can also be charged wirelessly? Say goodbye to the troubles of charging, a good peripheral device for “free charging” of grains
04/01/2021
ABOUT US
Go to Top