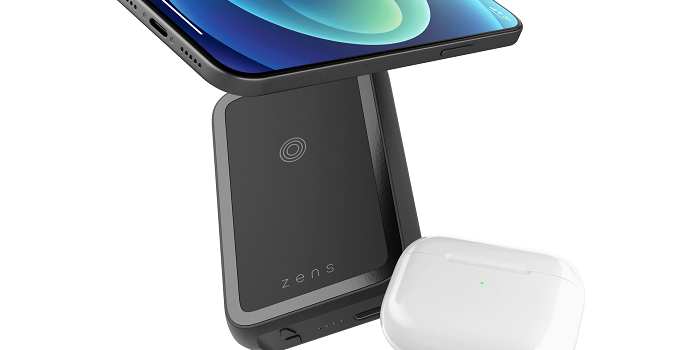 Although power banks that support wireless charging are nothing new, Zens’s new Magnetic Dual Powerbank power bank still relies on the unique dual-sided wireless charging function, which makes many mobile device users happy. If you are used to carrying iPhone + AirPods to go out at the same time, but feel anxious about the battery, then this double-sided wireless power bank can easily replenish energy for your phone and true wireless earphones at the same time.

● Including the Magnetic Single Powerbank power bank equipped with a wireless charging coil on one side only – the price is 49.99 Euros (approximately 384 RMB);

In theory, you can use Magnetic Dual Powerbank to recharge any two Qi wireless charging devices.

But the best fit case given by Zens is an iPhone smart phone + a pair of AirPods true wireless headphones.

Unfortunately, Zens did not mention the charging speed on the Dual Powerbank product page, so it is not clear that its output power matches the official Apple MagSafe accessory (15W fast charge).

Dual Powerbank has a built-in battery capacity of 4000mAh, provides a USB-C port, and a small bracket on one side for users to use while charging.

The palm-size can charge 4 mobile phones at the same time! Bringing your own cable can be wireless, and taking it out is super easy
06/18/2021

Bloomberg: Next year iPad Pro will have glass back cover and MagSafe wireless charging
06/05/2021